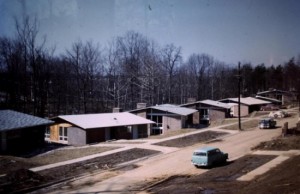 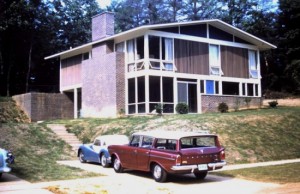 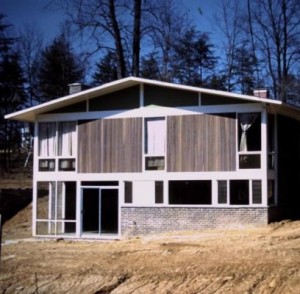 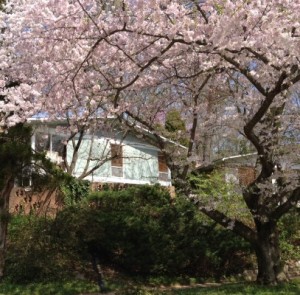 Rock Creek Woods, a suburban development located in Montgomery County, Maryland just outside Washington, D.C., consists of 76 midcentury modern houses nestled in a wooded valley between two creeks. These houses, designed by Charles Goodman, were built between 1958 and l961 by Herschel and Marvin Blumberg, merchant builders who headed up the Bancroft Construction Company. Located roughly one mile north of Kensington, Maryland, in Section 21 of Rock Creek Palisades, the Rock Creek Woods subdivision is bounded on the east by Connecticut Avenue and a town house development, on the west by a small stream called St. Joseph’s Branch (a tributary of Rock Creek), on the north by the Connecticut Avenue Hills subdivision, and on the south by St. James Run, another small creek in the Rock Creek watershed.

The subdivision consists of three streets that form a large, self-contained and wooded cul-de-sac tucked away at the end of a Connecticut Avenue service road. The development’s two curving dead-end streets (Spruell Drive and Rickover Road) hug the contours of the land and are linked by Ingersol Drive, which loops between them. The streets in Rock Creek Palisades were named after World War II admirals, including Byrd, Dewey, Rickover, Ingersol and Spruell, a practice possibly related to North Kensington, where street names commemorate such earlier admirals as Perry and Farragut.

At the time of its construction, Rock Creek Woods was reached by a circuitous route, which started from Newport Mill Road, meandered through several side streets, and entered the community via a narrow gravel road. An important transportation change came in 1964, when Connecticut Avenue was extended from Kensington north to Georgia Avenue in Aspen Hill. At that time, the U.S. Postal Service changed the neighborhood’s mailing address from Kensington, Maryland, to Silver Spring.

The siting was supervised by Charles Goodman, who made every effort to preserve the trees indigenous to the area and blend the houses into the existing topography so they become a part of the natural surroundings. Goodman’s homes in Rock Creek Woods are full of innovative ideas and carefully thought out details. There are four models in the neighborhood, although the siting makes it appear that there are many more models than that.

The development typifies the characteristics of Goodman’s Contemporary merchant-builder houses. These houses are of sparse geometric design, based on panel blocks of vertical wood siding, glass, and brick and with gently sloping roofs and wide eaves. The houses take advantage of natural grades and slopes to provide a lower level that is partially underground at the front, but fully above ground with a patio door and floor-to-ceiling windows at the side or back. Goodman’s houses are individually sited on the rough, steep land to save the old trees and to preserve privacy while giving light through the floor-to-ceiling window walls. The liberal use of glass gives the feel of an unbroken flow from inside to the natural world outdoors.

The naturally wooded, sloping land contains many large indigenous trees, including pines, oaks, tulip poplars, American beech, hickory, and dogwood. Except for the trees preserved by the builder, there were few new plantings immediately following the development’s completion. In 1959, when the county began to plant trees on the strip between the sidewalks and the road, two of the original owners—Calvin Foltz and John Volk—made a special request for cherry trees instead of shade trees. Homeowners paid $10 per tree and the county agreed to plant cherry trees. The original trees were the Yoshino variety with a life span of 40 to 50 years.

Today, the houses in Rock Creek Woods are nestled within a landscape of mature vegetation, with the original trees augmented by hundreds of additional ornamental trees as well as by azaleas, rhododendrons, forsythia, and many other shrubs and broadleaf evergreens. The subdivision has several houses with large Goodman-designed brick screening walls. About two-thirds of the houses now have some type of wood fencing.  Goodman’s houses still exhibit the characteristic of “borrowed views,” wherein one neighbor’s yard merges with another to form the sense of a communal park.  Most homeowners have opted for natural and informal, rather than formal, landscaping.  A walk through the current Rock Creek Woods neighborhood in spring offers a breathtaking view of the signature cherry trees. They now form a green canopy arching over the streets.  During the height of their blossoming, the cherry tree petals blanket the yards and streets in pink.

Many original cherry trees are now showing signs of aging, and a substantial number have had to be removed. In l998, with the assistance of a pilot beautification grant from Montgomery County, the Rock Creek Woods Civic Association planted 44 new Yoshino cherry trees. In 2001, an additional 34 Yoshino trees were installed with the help of a second County beautification grant.

Today, the homes in Rock Creek Woods still look very much as they did when originally built. In terms of architectural integrity, the houses themselves have undergone relatively few changes on the exterior. The community has successfully maintained Goodman’s original Contemporary idiom.

Back in 2016, Rock Creek Woods residents formed a committee to save the archive of Charles Goodman drawings at the Library of Congress (LOC). Residents contributed all of the funds necessary to inventory, photograph, and catalog the archive, and provide conservation treatment as necessary.

The Rock Creek Woods community can be very proud that all original drawings and selected blueprints in the Rock Creek Woods Collection in the Charles M. Goodman Archives at the Library of Congress have now been fully cataloged and digitized and are available for public access. And here they are!

Digitization of these fragile works on paper will help preserve Goodman’s legacy. Having this resource can help us protect the historic character of this community while at the same time supporting  innovations.

Without this Rock Creek Woods project, the fragile Goodman drawings would have been tightly rolled up again and put back into deep storage off-site. Instead, anybody can now access these drawings online. Each drawing has a detailed bibliographic record and a high-resolution image is available to download for free.