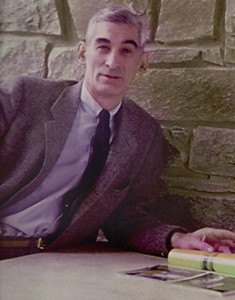 Charles M. Goodman was an innovative architect who was a leader in bringing contemporary design and creative site planning to the housing market in the Washington, DC area.

After graduating college, Goodman came to the DC area to work as an architect for the Treasury Department as part of a New Deal program where he became involved in the design of public buildings across the nation. He was credited with designing a post office in Evanston, Illinois, a federal office building in New Orleans and a group of federal buildings at the New York World’s Fair of l939. His buildings showed a shift in governmental style, from neoclassical columns and pediments toward the simplicity of modernism.

After the war, he started to work with builder Robert Davenport on Hollin Hills, a Fairfax County Community praised for its 450 glass, wood and brick houses and for the way they blended with their sloping wooded sites.

The Hollin Hills development was begun in 1946 as a generation of Americans was returning from the war and starting families. With its mix of low-slung, tree-shielded, one-story, two-story and split-level houses on quiet cul-de-sacs, it became a national landmark in the creation of livable planned communities.

The chorus of praise for Hollin Hills was not unanimous. In 1953, House Beautiful magazine editor Elizabeth Gordon launched an assault on Modernist design, calling it “The Threat to the New America.” Gordon charged that a conspiracy (subtext Communism) was attacking the heart of American society — the home — and swaying Americans towards “foreign” design. Buildings by Philip Johnson and Charles Goodman were called barren, grim, and unlivable.

In spite of House Beautiful, Hollin Hills took shape over the years and brought Goodman commissions for other suburban project in the area. These included Hammond Hill, Hammond Woods, Rock Creek Woods, Wheatoncrest, and Hollinridge in Montgomery County; and Lake Barcroft Estates, Oak Forest, and The Commons of McLean in Fairfax County.

The Commons, begun in early 1966, was a 38-acre development which included one-to-three-bedroom garden apartments and two-to-four-bedroom townhouses. Goodman was hired to create not just a development, but a real community. Its beautifully planned and naturally landscaped garden apartments and townhouses were built to give the employees of the region’s first-ever office park next door a wonderful place to live. Goodman had established himself as a leading light in both housing architecture and community-enhancing environments.

Goodman also designed the 134 town houses and the eight-story apartment building of the River Park Cooperative Homes development near Fourth Street and Delaware Avenue in Southwest DC, and some of the first town houses in Reston were built according to his designs.

Rice University in Houston honored Goodman in 1963 as one of eight “great American architects” it called people’s architects, “who possess profound feeling for social responsibility and the successful incorporation of human values into their buildings.”